The Arthur J. Holland Program on Ethics in Government honors the distinguished Rutgers alumnus and long-time Mayor of Trenton. The program seeks to promote transparency and honesty in public affairs and to improve public policy and government practices by replacing cynicism and apathy with awareness.

About the Holland Program on Ethics in Government

The Arthur J. Holland Program on Ethics in Government honors the distinguished Rutgers alumnus and long-time mayor of Trenton. The program seeks to promote transparency and honesty in public affairs and to improve public policy and government practices by replacing cynicism and apathy with awareness. It provides opportunities for students, public officials and the general public to focus on practices that can be adopted by government entities and individual practitioners to serve constituents as responsively and ethically as possible. The annual program components include a public lecture and discussion, a workshop at the New Jersey League of Municipalities Conference, and occasional other initiatives.

Each year, a speaker is selected for a public lecture and discussion on the Rutgers-New Brunswick campus that honors Arthur J. Holland’s legacy by focusing on promoting transparency and honesty in public affairs. Past speakers have included:

Each November, Eagleton Institute of Politics and the New Jersey League of Municipalities collaborate on a panel discussion on ethics in government. The session is part of the League’s annual convention in Atlantic City. Approximately 250-300 local officials attend this late-afternoon session each year. See the full list of panelists here. 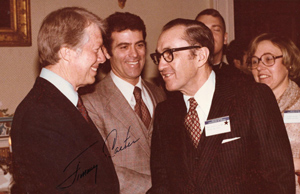 “Political virtue is not only its own reward – that being peace of conscience and freedom from fear of exposure—it is the means to freedom of administrative action.”
–Arthur J. Holland

The hallmark of Holland’s administration was always having “an open door” to his office. He insisted on doing the public’s business in public and opened City Hall meetings to both the public and the press.

“Art Holland was the best of the best…His sense of public service was the most pure…His sense of honesty was legend…He was our leader—the mayors of America—and so proud to be.”
–Mayor Joseph Riley, Charleston, South Carolina

Holland’s other principle of good government was never to exploit his position for any personal advantage. Gifts—no matter how small or innocently offered—were returned. Favors were rejected, lunches refused, and contributions from developers declined. He insisted that “good government was good politics.”

Holland believed that public service was among the highest life callings and that politics was an honorable profession. He strove to make certain that all residents of Trenton were included in their government. He was equally dedicated to encouraging young people to enter careers in government service – a message he imparted while teaching at Rutgers University and Rider University.

“Arthur J. Holland was an extraordinary politician and an extraordinary individual. Even more striking than the enduring quality of Mayor Holland’s leadership was its ethical consistency. Honesty and idealism were bred in his bones.”
–The Trenton Times

Suffering from urban decay, industrial plant closings, and suburban flight like so many New Jersey cities at the time, Trenton needed a shot in the arm, and Mayor Holland provided it. He sought funds to revitalize blighted areas and attracted new money to build office buildings and roadways.  He and his family lived in one of the city’s most troubled neighborhoods. Above all, he brought to his post impeccable personal integrity.

“Mayor Arthur Holland and his young wife were idealistic newlyweds with a baby daughter in 1964 when they decided to restore a house in Trenton’s crumbling, if historic, Mill Hill neighborhood… [T]he media saw the significance and symbolism behind the mayor of an aging American city moving in with his poorest and most disgruntled constituents and Art and Betty Holland became worldwide news… [T]he Hollands explained repeatedly that they felt Americans of all ethnic backgrounds should and could live together without strife.”
–The Trentonian

While on the faculty at Rutgers’ Urban Studies Center—where he helped develop the “New Jersey Future Issues” seminar, involving local and state officials, community leaders, citizens, and students – he stressed that it was not enough for government to be honest; it must also be perceived as honest by the public.

In 1988, Holland was elected by his peers as president of the U.S. Conference of Mayors. Throughout his tenure, he traveled the country addressing issues that affected urban America: the destruction of America’s cities by drug use and crime, and the need to improve housing, public transit and job training. He traveled abroad to encourage mayors of other nations to organize to engage the problems that affected their cities.