Each November, the Eagleton Institute of Politics and the New Jersey League of Municipalities collaborate on a panel discussion on ethics in government. The session is part of the League’s annual convention in Atlantic City. Approximately 250-300 local officials attend this late-afternoon session each year. See the full list of Holland Workshops: 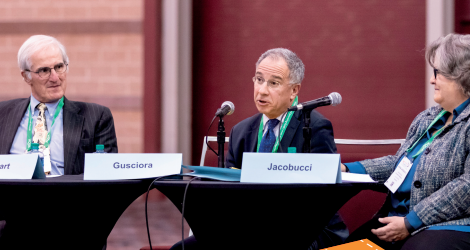 The 2019 Arthur J. Holland session, “How Close Are You to Being Falsely Prosecuted? A Cautionary Story” featured two speakers, Anthony Suarez, mayor of Ridgefield Borough, and Keith Balla, mayor of Watchung Borough. In 2008 Mayor Suarez was falsely prosecuted in the Operation Bid Rig III investigation which ultimately convicted 25 people. His book, “Politically Indicted, the Real Story Behind the Jersey Sting”, shows you can be careful & honest and still be caught up in prosecutions. Serving the public entails greater scrutiny; you may need to take extraordinary steps to protect yourself when entering New Jersey politics. If politics and law enforcement clash the result can be a disaster for elected officials. John Weingart, associate director of Eagleton and director of the Arthur J. Holland Ethics in Government Program, gave opening remarks and Robert Conley, mayor of Madison Borough, presided over the session.

The 2018 Arthur J. Holland session focused on “Gray Areas in Local Ethics & How to Navigate Them.” Municipal officials from across the state attended the session, which was led by Reed Gusciora, Mayor of Trenton. The audience also heard from Paul Fishman, former U.S. Attorney for the District of New Jersey, Susan Jacobucci, administrator of Paulsboro Borough and former Director of the NJ Division of Local Government Services. Gusciora and Jacobucci drew upon their extensive public service experience to discuss the challenges of understanding local government ethics laws and how elected officials can confidently navigate the gray areas of those laws.

In 2017, the Arthur J. Holland session at the New Jersey League of Municipalities annual convention focused on municipal ethics programs and the Department of Community Affairs’ Local Finance Board. Attendees had the opportunity to hear first-hand experiences about the process for addressing routine ethics violations. Speakers included: Hamilton Township Mayor Kelly Yaede, who rebuilt the code of ethics in her municipality, and William Close, a member of the Local Finance Board.

The 2016 session was designed to help local officials learn ways of engaging and building trust with the residents they serve to help reduce the likelihood of violent extremism in their communities. The session was led by Timothy C. McDonough, mayor of Hope, NJ and past president of the League. Attendees also heard from Ehsan Zaffar, senior policy advisor, Office for Civil Rights and Civil Liberties, US Department of Homeland Security, and Rosemary Martorana, director of intelligence, New Jersey Office of Homeland Security and Preparedness. The panelists discussed how violent groups attract and recruit at the local level and explained the role of public officials in recognizing and addressing extremism. They suggested tools and reviewed core training to help attendees identify and mitigate potentially violent dilemmas that may surface in their municipalities.

The program at the League Convention this year featured Joe Riley just as he was stepping down after 40 years as Mayor of Charleston, South Carolina. The talk was special not only because Riley is widely heralded for stimulating and overseeing the city’s impressive revitalization while leading a scandal-free administration, but also because he and Arthur Holland had been good friends. Their tenures as Mayors of Charleston and Trenton had overlapped, and the two men and their families had become close. Riley’s comments, which were summarized in a major article in the League’s magazine, NJ Municipalities, (February 2016), had added power and poignancy when he spoke of his city’s response to the mass shooting that had occurred just five months earlier.

“Ethics, Reporters, and I Thought That Was Off The Record” was the provocative title of the Arthur J. Holland Program session Eagleton convened at the NJ League of Municipalities annual conference in Atlantic City. Pete McDonough, vice president for external affairs at Rutgers, and Tom Moran of The Star-Ledger reflected on their interactions from when Moran was a State House reporter and McDonough was Governor Christine Todd Whitman’s communications director. Their advice, echoed by panelist and municipal attorney William J. Kearns, Jr., was always to tell the truth and to make an explicit agreement about the ground rules at the start of any interview. Camden Mayor Dana Redd presided over the program that was moderated by Eagleton’s associate director, John Weingart.

After the League had to cancel their 2012 Convention because of Super Storm Sandy, Eagleton was fortunate to be able to move the Arthur J. Holland session that had been scheduled to take place that year to the November 2013 gathering. The keynote speaker, introduced by Camden Mayor Dana Redd, was Edwin H. Stern, former Presiding Judge for Administration of the Appellate Division and former temporary New Jersey Supreme Court Justice. Judge Stern spoke about ethical standards for local officials, noting that a growing body of court decisions expand the range of ethical obligations and potential conflicts of interest. Responding to Judge Stern’s address were William J. Kearns, General Counsel to the League, Mayor Adam Schneider of Long Branch and John Weingart of Eagleton.

The 2011 Arthur J. Holland session on Ethics in Government at the New Jersey League of Municipalities’ annual convention in Atlantic City focused on ensuring ethical practices at both the municipal and state level. Attended by more than 300 local officials, it included reflections, lessons and recommendations from Camden Mayor Dana Redd and Peter Tober, Executive Director of the State Ethics Commission with additional comments and responses from Bill Kearns, Jr., general counsel to the League of Municipalities and John Weingart, associate director of the Eagleton Institute.

A session on “Ethics in Government” was presented by the Holland Program at the New Jersey League of Municipalities’ annual convention in Atlantic City, as it has been for many years. Paula Franzese, Seton Hall law professor and past chair of the State Ethics Commission, was the keynote speaker with responses from Bill Kearns, Jr., general counsel to the League of Municipalities, Bill Schluter, former New Jersey state legislator, and John Weingart, associate director of the Eagleton Institute. Sophie Heymann, Mayor of Closter, presided over the discussion.

In 2009, about 300 local officials heard a discussion on ethical factors to consider when municipal and county governments seek to extend their reach through collaborations with non-profit organizations. The keynote speaker was David Grant, President of the Geraldine R. Dodge Foundation, with responses from Louise Wilson, Mayor of Montgomery Township, and Jeffrey Vega, Executive Director of New Brunswick Tomorrow and an alumnus of the Eagleton Fellowship Program.