The Eagleton Institute of Politics focuses attention on the structures, powers, and processes of the 50 state governments. The Institute recognizes that actions by these varying legislative and executive bodies have enormous direct impact and often serve as laboratories of American democracy.

The Institute approaches subjects and initiatives related to governors and state legislatures as it does all other topics—from a non-partisan perspective, blending scholarly study with understanding gained from past and present practitioners and informed observers.

The Eagleton Center on the American Governor (ECAG) seeks to promote research and discussion on the varied roles, powers, and legacies of governors in the United States in order to inform present and future state executive leadership and enhance historical knowledge and perspective.

The Center sponsors a range of academic activities and public forums on topics relating to U.S. governors and New Jersey governors—building a resource that includes research and an extensive video library.

Women Running for and Serving in State Office

Eagleton’s Center for American Women and Politics (CAWP) is home to an archive of current and historical fact sheets, graphics, research reports, and other information about women candidates and officeholders across all fifty states. CAWP research and scholarship promotes greater knowledge and understanding about women’s participation in politics and government.

The Center’s national network of Ready to Run® campaign training programs includes partners in more than 20 states and it’s NEW Leadership® program for college women is also active in states across the country. The CAWP Political & Leadership Resource Map identifies state-based and national resources for women interested in elected or appointed office or work on political campaigns. In years when there is an open seat for governor in New Jersey, the Center convenes the NJ Bipartisan Coalition for Women’s Appointments (BCWA)—a statewide, bipartisan group of prominent women and organizations to ensure the placement of women in key positions throughout state government.

The late Alan Rosenthal, a former Institute director and longtime faculty member, was among the nation’s leading scholars on state legislatures. In his more than forty-year career, Professor Rosenthal worked in collaboration with legislatures in 35 states. He directed comprehensive organizational studies of legislatures in eight states, served as an ethics consultant to nine state legislatures and published defining works on the mechanics of the legislative branch.

Representation: How, and how well, do Americans get represented in our state political systems?

Executive Legislative Reforms: How and to what extent do legislatures check and balance the executive in a separation-of-powers system?

Legislative Ethics: How are legislatures and legislators performing in terms of ethical conduct?

Civic Education on Representative Democracy: What should students at all levels learn about the role of legislatures in representative democracy?

Legislative Reform: What are the main problems legislatures face today, and what new reforms offer the greatest promise?

A list of selected research and publications by Professor Rosenthal, including 19 books he wrote or edited, is included in the Eagleton research database.

Initially created by Professor Rosenthal, a graduate course in Legislative Policymaking is offered at Eagleton each fall. The course incorporates legislatures throughout the nation with guest practitioners providing insider knowledge of the NJ Legislature. It is currently taught by Richard Bagger, a former NJ State Senator, mayor, and chief of staff to the governor. 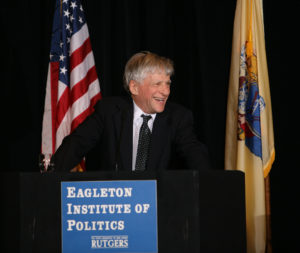 Alan Rosenthal Fund for the Study of State Government and Politics

Immersing himself for almost 50 years in studying and improving state government, Professor Alan Rosenthal, the leading expert in his field, set a high standard for research, education and service.

To honor and extend his legacy, Eagleton has established the Alan Rosenthal Fund for the Study of State Government and Politics. This flexible fund supports teaching, educational programs, and research that increase understanding of the workings of our democracy and help students make critical connections between their field of academic study and hands-on practical experience in state government and politics.

Tax deductible contributions to this fund may be made online here.

The Eagleton Institute launched a new project in 2021, “NJ Redistricting: Community Engagement Prioritizing New Jersey’s Communities of Color,” through the generous support of the Fair Redistricting in New Jersey Fund of the Princeton Area Community Foundation. In collaboration with a statewide nonpartisan coalition, the project aims to engage a diverse cohort of community groups in the redistricting process and specifically to engage Rutgers students in utilizing district mapping technology.

The Institute is pleased to be working with several coalition partners, including:

In addition, select Rutgers students now have the opportunity to gain hands-on experience supporting both the New Jersey Congressional Redistricting Commission and the New Jersey Legislative Apportionment Commission. Interns report directly and exclusively to the Chair of the Congressional Commission and the tie-breaking-member of the Apportionment Commission or their counsel. Students seeking course credit will complete 140-160 hours of service and complete a final paper reflecting on their experience.

Redistricting: What’s it all about?
Eagleton Visiting Associate Ingrid Reed takes an in-depth look at the history of redrawing electoral district lines based on the U.S. Census every ten years in New Jersey and throughout the United States.

Watch the video to learn more about how the process works.

Redistricting: The Road to Reform (May 2021 Student Report)

Eagleton Undergraduate Associate Fiona Kniaz received a 2020-2021 award from the John and Ann Holt Fund for Undergraduate Applied Research in American Politics to explore redistricting reform. Fiona, a senior majoring in political science and economics, worked under the supervision of Eagleton Assistant Research Professor and Center on the American Governor Historian Kristoffer Shields.

Learn more about Fiona’s experience and read the report.

Reading Between the Lines: Congressional and State Legislative Redistricting, Their Reform in Iowa, Arizona and California, and Ideas for Change in New Jersey

Reading Between the Lines is a paper and presentation created by Benjamin Brickner in May 2010.

Launched in 2002 with funding from the Pew Charitable Trusts, the Young Elected Leaders Project (YELP) studies and works with young people who run for public office. The project tracks candidates and office holders at the state and congressional level.

Eagleton’s work on state politics and government is available in the Eagleton research database—including reports on New Jersey state campaigns and elections, redistricting and reapportionment in the Garden State, as well as state boards and commissions. Additional efforts to study New Jersey politics and inspire engagement include:

The State House Express program was designed by Eagleton and the New Jersey Office of Legislative Services to give students a front-row seat to democracy by supporting field trips to visit the New Jersey State House.

This small grants program provides awards of $500 to eligible teachers of government, civics, history, and other social studies classes in grades 4 through 12. The grants are designed to help pay for bus rental costs to take classes on field trips to the State House in Trenton for special guided tours and first-hand examination of the legislature’s role in our system of representative democracy.

The Rutgers-Eagleton Poll is a statewide telephone survey that measures public opinion about politics and policy in New Jersey. Founded in 1971, the poll, which is conducted by the Eagleton Center for Public Interest Polling, examines everything from job approval ratings for presidents, governors and senators to attitudes regarding property taxes, public corruption, homeland security and a host of other issues.

Over the past 20 years, Ready to Run® New Jersey has trained over 4,000 women to run for office, seek appointed positions, and manage campaigns. A project of Eagleton’s Center for American Women and Politics, the program includes a Diversity Initiative to attract more women of color into the political process and encourage them to seek public leadership.

The New Jersey section also includes information that sheds light on others who have served as the state’s chief executive and ways in which various governors have addressed endemic policy issues and institutional relationships. 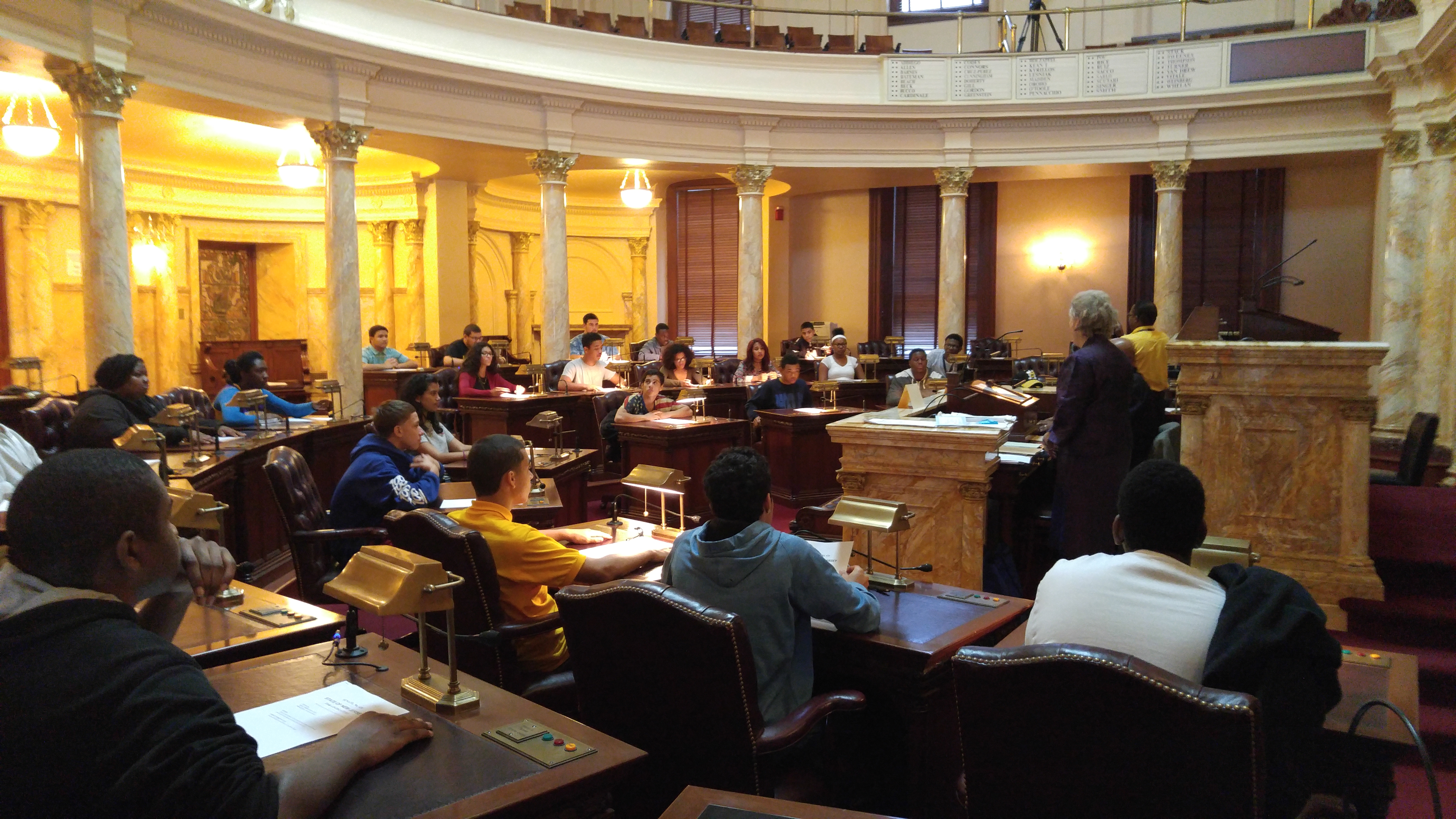 The Eagleton Science and Politics Fellowship offers PhD-level scientists and engineers the opportunity to apply their training and expertise to the development and implementation of relevant state policy. As full-time aides in the executive or legislative branch, Eagleton Science Fellows bring their advanced technical skills to service in New Jersey state government. This program was inaugurated on a pilot basis for the 2019/2020 academic year.

Eagleton helps Rutgers University graduate students link the study of politics with its day-to-day practice. Students learn about how American politics and government work and change and build practical skills for political engagement.

Eagleton helps Rutgers University undergraduate students link the study of politics with its day-to-day practice. Students learn about how American politics and government work and change and build practical skills for political engagement.

A small grants program that provides $500 awards to eligible teachers of social studies classes in grades 4 through 12 that helps fund class field trips to the New Jersey State House.

Ready to Run® is a non-partisan campaign training program to encourage women to run for elective office, position themselves for appointive office, work on a campaign, or get involved in public life in other ways.