Learn more about Fiona’s research and read her report. 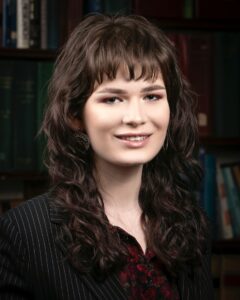 How did the award contribute to your research and academic experience?
Receiving the Holt Award provided me with my first ever opportunity to conduct grant-funded research, which I consider a major steppingstone in my academic and professional career. The award enabled me to collect data on all 50 states’ redistricting processes, analyze proposed reforms, write a report that was later published by Eagleton, and speak with some of the premier experts in the field.

While my previous research on gubernatorial redistricting powers with the Eagleton Center on the American Governor sparked my initial interest in redistricting, the Holt Award allowed me to pursue the topic of redistricting with greater depth.

Mapmakers try to meet several, often conflicting, objectives when drawing new maps such as compactness, racial fairness, representativeness, and competitiveness just to name a few. Ultimately, I concluded that “ending gerrymandering” is not possible as one group will always be able to take issue with some aspect of a map and declare foul play.

Rather, the goal should be to make the redistricting process consistent and as legitimate in the eyes of the electorate as possible through state adoption of consistent, clear, and measurable criteria for new districts. Some universal solutions include the adoption of independent redistricting commissions, strengthened protections for communities of color, and the creation of opportunities for further citizen involvement in the process.

How has it prepared you for future coursework and your future profession?
My research experience through the Holt Award confirmed my interest in policy research, preparing me for my senior honors thesis and prospective Ph.D. work. Working with my faculty advisor, Professor Kristoffer Shields, provided me with invaluable guidance for not only my research but also for my professional aspirations.

Eagleton’s Center for Youth Political Participation accepts applications to the award on a rolling basis. Reach out to Jessica Ronan at CYPP for more information.