Let There Be Light: 2020 Kristallnacht Commemoration

Friday, November 13, 2020 – Rutgers’ Miller Center for Community Protection and Resilience partnered with the International March of the Living and the Jüdischen Gemeinde Frankfurt to host the 2020 Kristallnacht Commemoration Let There Be Light.

“Kristallnacht was the event that brought the dagger fully out from under the robe. It was the event in which hatred migrated permanently across the brain blood barrier of extremism and became open state sponsored violence… The Nazis unleashed a storm of destruction and murder on November 9, 1938 – a signaled and decisive turn to state sponsored violence. Synagogues, shops, and homes were vandalized and burned in the thousands. Over 90 Jews were murdered… The police stood by and watched where they didn’t actively participate themselves. 2,000 Jews were seized and sent to concentration camps… After Kristallnacht the course was set,” said John J. Farmer, Jr., director of both the Eagleton Institute of Politics and the Miller Center.

“That history also urges us to look closely at the world we confront today – the way vulnerable populations are treated, the persistence of hate and its many forms of expression, the efforts of extremist groups to move from marginal players to mainstream actors. The protection of vulnerable populations is the purpose of the Miller Center at Rutgers. We’ve worked with communities as diverse as the Muslim community in Brussels, the Jewish community in Whitefish, Montana, the African American community in Louisiana and Mississippi, and the Sikh community in Wisconsin. In seeking to assist these communities, we have been struck with a common thread and a common threat. The increasing use of social media and the cyber world as a means of recruitment, incitement, and dissemination of hatred…”

“The extremism spread on social media may be small in number and marginalized for the moment, but the example of Kristallnacht should arrest any temptation to dismiss them. For just how Kristallnacht and what followed resulted from intensely controlled and intensified messaging of hateful propaganda, so is the extremism of today a product of the social media environment that reinforces every form of prejudice that converts general proclivities to fixed convictions. Our work has shown that when our messaging of hate has reached a peak of intensity, murderous violence erupts… The only answer to such hate is light. The light of truth – the truth that shames every form of hate.” said Farmer. 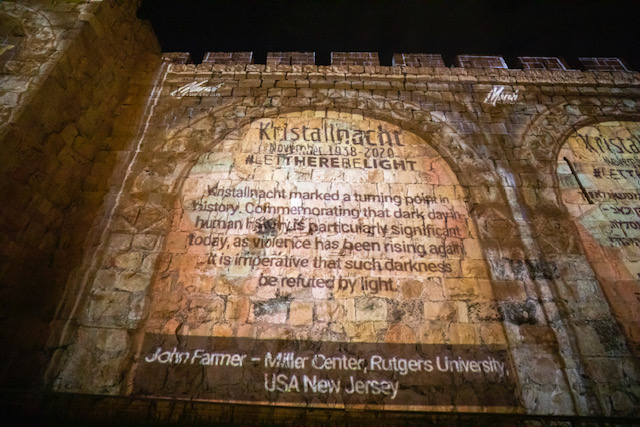 “Kristallnacht marked a turning point in history. Commemorating that dark day in human history is particularly significant today, as violence has been rising again. It is imperative that such darkness be refuted by light,” wrote Farmer, whose Kristallnacht message was on display in Jerusalem.

Learn more about the Miller Center, which is affiliated with Eagleton and Rutgers Law School.