As part of the Albert W. Lewitt Endowed Lecture Series and Hispanic Heritage Month, join Veronica Duron, Chief of Staff to US Senator Cory Booker, for a virtual conversation as she discusses the importance of diversity in the supporting staff of Congress.

Before joining Senator Booker’s team, Duron was a member of the policy staff for Senate Majority Leader Charles Schumer. “Veronica is smart and passionate about her work,” Senator Schumer (D-NY) said in a statement, “and as one of only a handful of Latinas to ever become a Senate Chief of Staff, she continues inspiring others to follow in her footsteps and helping us bring more diversity to the U.S. Senate.” 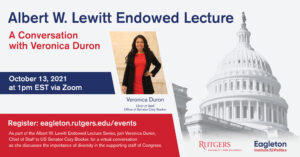 Kelly Dittmar is an Associate Professor of Political Science at Rutgers University–Camden and Scholar at the Center for American Women and Politics at the Eagleton Institute of Politics. She is the co-author of A Seat at the Table: Congresswomen’s Perspectives on Why Their Representation Matters (Oxford University Press, 2018) (with Kira Sanbonmatsu and Susan J. Carroll) and author of Navigating Gendered Terrain: Stereotypes and Strategy in Political Campaigns (Temple University Press, 2015). Dittmar’s research focuses on gender and American political institutions. Dittmar was an American Political Science Association (APSA) Congressional Fellow from 2011 to 2012.