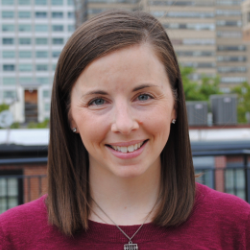 Kelly Dittmar is an Associate Professor of Political Science at Rutgers University–Camden and Scholar at the Center for American Women and Politics at the Eagleton Institute of Politics. She is the co-author of A Seat at the Table: Congresswomen’s Perspectives on Why Their Representation Matters (Oxford University Press, 2018) (with Kira Sanbonmatsu and Susan J. Carroll) and author of Navigating Gendered Terrain: Stereotypes and Strategy in Political Campaigns (Temple University Press, 2015). Dittmar’s research focuses on gender and American political institutions. Dittmar was an American Political Science Association (APSA) Congressional Fellow from 2011 to 2012. At CAWP, she manages national research projects, helps to develop and implement CAWP’s research agenda, and contributes to CAWP reports, publications, and analyses. She also works with CAWP’s programs for women’s public leadership and has been an expert source and commentator for media outlets including MSNBC, NPR, PBS, the New York Times, and the Washington Post. Dittmar earned her B.A. from Aquinas College in Grand Rapids, MI and her Ph.D. from Rutgers University-New Brunswick.