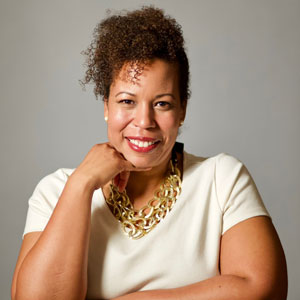 Kimberly Peeler-Allen has been working at the intersection of race, gender and politics for almost 20 years. Kimberly is the Co-founder of Higher Heights, a national organization building the political power and leadership of Black women from the voting booth to elected office.

Kimberly and her Co-Founder Glynda Carr have built Higher Heights from an idea on the back of a placemat into a network of over 90,000 members, donors and activists across the country that have helped elect 10 Black women to Congress, 1 Black woman to the US Senate and grow the number of Black women in statewide executive office and leading our nation’s largest cities.

Higher Heights has helped drive the national narrative about the power of Black women voters and has inspired countless Black women to step into their power whether it is as voters, activists or elected leaders.

A highly skilled political fundraiser and event planner, Kimberly was the principal of Peeler-Allen Consulting, LLC from 2003 to 2014, the only African American full-time fundraising consulting firm in New York State. Kimberly served as finance director for Letitia James’ successful bid to become Public Advocate of the City of New York and the first African American woman elected citywide in New York’s history.

In 2018, Kimberly was selected as one of the Roddenberry Fellowship’s 20 incredible established and emerging activists to devote an entire year to projects that will make the U.S. more inclusive and equitable through their inaugural cohort.

Launched in 2018, Kimberly is a founding member and served as Board Chair of ReflectUS, a non-partisan coalition of some of the nation’s leading organizations focused on women’s political leadership. ReflectUS is a data-driven effort to fast-track gender representation at all levels of government. The ground-breaking coalition is designed to increase the number of women elected to office and achieve representation in politics for women from across the ideological, racial, ethnic and geographic spectrum.

Kimberly also serves as a board member of ERA Coalition and the Fund for Women’s Equity.

Kimberly is drawing on her life experience as an organizer and operative to write her first book, Activist Momma, a celebration of this intersection and the gifts that mothers bring to movement work. It profiles the lives of a group of black women who are leading some of the most impactful movements at the local and national level.