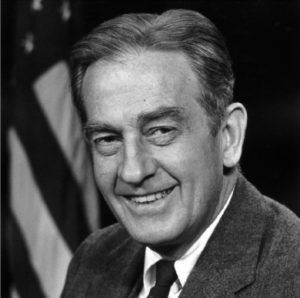 Case was first elected to office as a member of the Rahway Common Council from 1938 to 1942. He served in New Jersey’s General Assembly from 1943 to 1944. He won election to the U.S. House of Representatives in 1944 from what was then the Sixth New Jersey District (Union County) and served in the House until 1953. He resigned from the House in 1953 to assume the presidency of the Fund for the Republic. In 1954, Case won his Senate seat as an anti-McCarthy Republican. Re-elected in 1960, 1966, and 1972, he served on the Committee on Foreign Relations (where he rose to ranking minority member), the Appropriations Committee, the Board of the Office of Technology Assessment, the Select Committee on Intelligence, and the Commission on Security and Co-operation in Europe. A champion of civil liberties, Senator Case was known for his willingness to stand up for matters of conscience. He spoke out against Senator McCarthy, opposed the Vietnam War, and was a strong supporter of civil rights and the labor movement.