On the Passing of Candy Straight

Monday, June 14, 2021 – We are deeply saddened by the sudden passing of Candy Straight yesterday and send our sympathy and condolences to her family and her many friends. Candy has worked closely with the Eagleton Institute of Politics and its Center for American Women and Politics for decades, and she has brought to our educational and programmatic initiatives her unceasing commitment to the brightest ideals of government and democracy.

Candy’s passion for politics was built upon her compassion for others. She was deeply devoted to her family, particularly her brother Dwight and her mother Dorothy, who was, until her passing, Candy’s constant companion at Eagleton and CAWP events. This devotion rippled outwards to her beloved lifetime community of Bloomfield, New Jersey and into her unfailing vision of a politics of mutual respect, comity, and the hard work of compromise in service of improving people’s lives.

Candy was a champion for women’s voices and was constantly engaged in the work of bringing women into the political process. She was a leader in organizations both nationally and in NJ to expand the voice of women in politics. This included chairing the Republican Majority for Choice, serving as president of WISH List, and most recently co-founding Women for a Stronger New Jersey. She was a regular presenter at CAWP’s Ready to Run® campaign training program for women for two decades, where she brought her knowledge and expertise to generations of women. “Candy was someone I could always turn to for advice. Her insight and keen understanding of politics was unmatched and invaluable as we shaped new programs and research,” said CAWP Director Debbie Walsh. “Up to her last days, she was talking about the future for women in politics, looking for solutions, looking for ways to expand women’s influence in the Republican Party, and searching for strategies to support moderate women. It was a lifetime commitment in the most sincere sense of the word.” 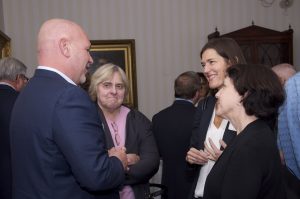 A life-long Republican, she served as a visiting associate at Eagleton for more than a decade and generously shared her deep knowledge of public finance and her penchant for truth-telling with students, invaluable gifts for our educational mission. “Candy believed in the Republican Party, but she wasn’t interested in party purity. She maintained relationships, personal and professional, with people across the political spectrum,” said Eagleton Director John J. Farmer Jr. “She was committed to a better democracy and the often difficult but always necessary task of working across parties and between people to make our democracy function for everyone. Most of all, she believed that women’s increased participation in American democracy was a key to strengthening it.”

“As a Board of Governors member, Candy was also a fierce champion of Rutgers as a statewide state university. During a critical time, when political leaders of both parties threatened to dismember the university, Candy was a strong voice in Trenton for the need for a preeminent statewide research university,” said Farmer. 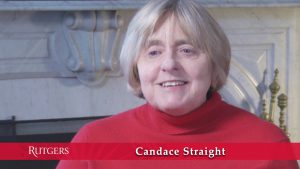 In an interview with the Eagleton Center on the American Governor during her service on the Rutgers Board of Governors, Candy reflected on her legacy: “I hope that I’ve been a mentor for both women in politics and women in business.”

“There is no doubt that Candy fulfilled her personal mission as a mentor,” said Farmer. “She touched the lives of countless Eagleton students and young professionals who are now shaping a more inclusive generation of political leaders, just as Candy envisioned.”

The passing of Candy Straight is a tremendous loss to the Center for American Women and Politics and the Eagleton Institute of Politics. We will miss her as a trusted advisor, as a supporter, and, most of all, as a friend. Her presence made our work better. Her absence will be felt for years to come. This is also an enormous blow to the politics of New Jersey and the United States. Her tireless work in support of expanding women’s participation and leadership in the Republican Party will be difficult to replicate or replace.

Candy’s family has asked that, in lieu of flowers, donations be made in her honor to the Candace L. Straight Legacy Fund she established at the Center for American Women and Politics. Gifts can be made online. Alternatively, gifts can be made by check payable to: “Rutgers University Foundation/Candace L. Straight Legacy Fund” and mailed to: Rutgers University Foundation, PO Box 193, New Brunswick, NJ 08903-0193, Attn: Sue Nemeth.

We hope that you will join us in reflecting on the legacy of her work by nurturing the hope that resides in each of us for a politics built on devotion to community and a democracy representative of all.