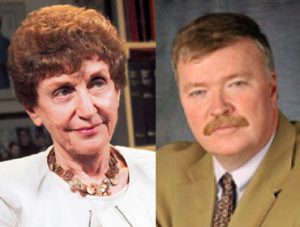 As you may have heard, Rutgers-New Brunswick Chancellor Christopher J. Molloy announced my decision to step down as director of the Eagleton Institute of Politics and his decision to appoint John J. Farmer, Jr. as Eagleton’s next director. On September 1st, l will resume my faculty role as Board of Governors Professor of Politics and Senior Scholar at the Center for American Women and Politics (CAWP) and begin a long-anticipated one year research leave.

I approach this transition with wonderfully mixed feelings. I am proud of the Institute’s long-standing, nationally-respected centers and programs, as well as ground-breaking new ones that have been initiated and nurtured on my watch, the hundreds of inspiring undergraduate and graduate students who have passed through our doors, and the amazingly impressive and collegial faculty and staff who have been attracted to the Institute and, in many cases, continued to work here almost as long as me.

No doubt I will miss almost every aspect of this position I have held since 1995. There will be moments of regret that I’m not at the helm trying to steer Eagleton through this challenging era in American politics.

At the same time and most important, I am thrilled about the prospects for Eagleton’s future under its new leadership. I couldn’t be more enthusiastic about the Chancellor’s choice of the next director. This appointment is so good for the Institute! I have unabashed admiration and the highest respect for John Farmer and can think of no one better to lead Eagleton as we craft its next chapter. As an Eagleton Faculty Associate, John has occupied the office next to mine since 2014, and I have had the pleasure of getting to know him well. He is an extraordinary person—knowledgeable, formidable, and delightfully genial. John brings to Eagleton deep and varied experience in state and national government as well as in top teaching and leadership roles at Rutgers. He is a gifted writer, already admired as an influential public intellectual and will be an esteemed Eagleton director.

In the coming months and years, I look forward to the time to reflect on our Institute’s worthy accomplishments, and anticipate the special pleasure of celebrating the 2021 50th anniversaries of Eagleton’s Center for American Women and Politics (CAWP) and the Eagleton Center for Public Interest Polling. I also hope to add my voice and pen to the ongoing challenge of enhancing our political discourse and educating new audiences to value our representative democracy and take on the responsibilities of improving it.

Above all, I eagerly anticipate the pleasure of time to sit down with many of you individually or in small groups to tell you what an honor and a joy it has been—and continues to be—to know you and to work together in a shared dedication to the Eagleton Institute’s proud mission.

With Respect and Affection,

I am writing to share news of a leadership transition at the Eagleton Institute of Politics.

After 24 years of distinguished leadership at Eagleton, Dr. Ruth B. Mandel will step down as director on August 31, 2019. As many of you know, Dr. Mandel has served as Eagleton’s director since 1995, and before that as a founding director of Eagleton’s Center for American Women and Politics (CAWP) from 1971 through 1994. Beginning in September, Dr. Mandel will take a one-year research leave before returning to her faculty role as Board of Governors Professor of Politics and Senior Scholar at CAWP. The University will forever be indebted to Professor Mandel for bringing both CAWP and Eagleton to national prominence, as valued venues for non-partisan research and engagement in the most important political issues of our time. Please join me in thanking Professor Mandel for her distinguished service as director of the Eagleton Institute of Politics.

I am pleased to announce that Professor Mandel will be succeeded by John J. Farmer, Jr, who has been appointed director of the Institute effective September 1, 2019. A university professor of law and former Dean of Rutgers School of Law—Newark, as well as Executive Vice President and General Counsel of Rutgers and Special Counsel to the President of Rutgers, Farmer has been a faculty associate at Eagleton since 2014. In addition to his appointment as Eagleton director, Farmer will continue his leadership of the Miller Center for Community Protection and Resilience (CPR), which is housed at and affiliated with the Institute and Law School.

Mandel joined the Eagleton Institute of Politics in 1971 as a founder of its Center for American Women and Politics. There she built a national center with multi-faceted research, education, public service and information programs about women’s political participation, a subject previously unexplored.

Following her appointment as director of the Eagleton Institute of Politics, CAWP’s home institution, Mandel spent nearly a quarter-century shaping a distinctive, pathbreaking academic organization, widely known and respected as the Rutgers “Place for Politics.” She nurtured existing strengths in an Institute established in 1956 and expanded Eagleton’s work into new arenas under the broad mandate of Florence Peshine Eagleton, whose founding bequest called for “the development of and education for responsible leadership in civic and governmental affairs and the solution of their political problems.”

As Eagleton director, Mandel transformed the Institute’s education programs, recruiting students from every Rutgers division to benefit from unique offerings on the undergraduate and graduate levels that blend classroom learning with direct experience in politics and government. She has developed an outstanding faculty and staff community bringing together educators, scholars and practitioners who explore both perennial and underexamined themes in American politics and government, including women’s political participation, youth political participation, governors and state executives, immigration and democracy, science and politics, civic engagement and public service, and ethics and public leadership.

Among other positions, Farmer has served as an Assistant U.S. Attorney, as Chief Counsel to Governor Christine Todd Whitman and, from 1999-2002, as New Jersey’s Attorney General.  As senior counsel and team leader for the 9/11 Commission, Farmer led the investigation of the country’s preparedness for and response to the terrorist attacks and was a principal author of the Commission’s final report. His book, The Ground Truth: The Story Behind America’s Defense on 9/11, was named a New York Times notable book. In 2008, he served as Senior Legal Advisor to General James Jones, the Special Envoy for Middle East Regional Security.  In 2011, he served as counsel to the commission that redrew New Jersey’s legislative districts and, later that year, was appointed the independent, tie-breaking member of the commission charged with developing a new map of New Jersey’s congressional districts.  Farmer has served as a member of the Advisory Committee on Judicial Conduct, as a member of the Governor’s Ethics Advisory Committee, and as a member of the Executive Commission on Ethical Standards.

Farmer was appointed dean of Rutgers School of Law-Newark in 2009, and served in that capacity until April 2013, when he became senior vice president and general counsel of Rutgers University.  He was named a University Professor in July 2014.

He has served as Director of the Miller Center for Community Protection and Resilience since its inception as the Faith-Based Communities Security Program in 2015, and will continue in that role.  The Miller Center has provided assistance to vulnerable populations as diverse as the Muslim population of Brussels, Belgium and the Jewish communities of Whitefish, Montana and Malmo, Sweden.  In addition, the Miller Center has partnered with the International March of the Living to immerse lawyers and Deans of Graduate Schools in Holocaust history and genocide prevention strategies, and with Stockton University to facilitate the creation and strengthening of an international resilience network.

Please join me in thanking Professor Mandel for her distinguished service as director of the Eagleton Institute of Politics. On the transition, I echo Mandel’s sentiment, “I could not be more pleased that John Farmer will lead Eagleton into a new era,” Mandel said. “An active scholar and highly respected member of the Rutgers faculty with notable leadership experience in New Jersey and national government, he is a thoughtful and forceful voice on behalf of our democracy and its institutions.”