Co-hosted by the W. Ford Schumann ’50 Program in Democratic Studies at Williams College.

The right to vote is a cornerstone principle for citizens in modern democracies. Historically, however, there have been challenges to this fundamental right. The history of the United States is no exception. 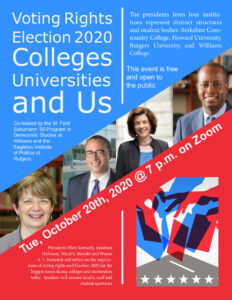 There have been notable advances the last several decades to mobilize voting by citizens. Nevertheless, over the last two decades, there has been a marked increase in measures to suppress the votes of younger and older citizens alike. Voter suppression has detrimental ramifications in a democracy. The stakes are acute particularly in an election year.

This webinar features Presidents from four institutions representing distinct structures and student bodies: Berkshire Community College, Howard University, Rutgers University, and Williams College. It is  co-hosted by the W. Ford Schumann ’50 Program in Democratic Studies at Williams and the Eagleton Institute of Politics at  Rutgers, and it invites the featured speakers to reflect on the implications of voting rights and Election 2020 for the biggest issues facing colleges and universities today. The event will contain both conversations among institutional leaders and the Presidents’ answers to questions posed by students, faculty, and staff at their respective institutions. Our goal is to generate discourses on a pressing topic and continue those discussions in our college and university communities well beyond the fall.

Moderated By:
John J. Farmer, Jr., Director of the Eagleton Institute of Politics
Neil Roberts, Chair and Professor of Africana Studies and Faculty Affiliate in Political Science and Religion at Williams College