Presented by the Louis J. Gambaccini Civic Engagement Series at the Eagleton Institute of Politics, The Princeton LGBT Center, and The Rutgers University Center for Social Justice Education and LGBT Communities. 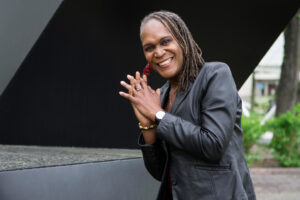 Andrea Jenkins is a writer, performance artist, poet, and transgender activist. She is the first African American openly trans woman to be elected to office in the United States. Jenkins moved to Minnesota to attend the University of Minnesota in 1979 and was eventually hired by the Hennepin County government, where she worked for a decade. Jenkins worked as a staff member on the Minneapolis City Council for 12 years before beginning work as curator of the Transgender Oral History Project at the University of Minnesota’s Jean-Nickolaus Tretter Collection in Gay, Lesbian, Bisexual and Transgender Studies.

She holds a Masters Degree in Community Development from Southern New Hampshire University, a MFA in Creative Writing from Hamline University and a Bachelors Degrees in Human Services from Metropolitan State University. She is a nationally and internationally recognized writer and artist, a 2011 Bush Fellow to advance the work of transgender inclusion, and the recipient of numerous awards and fellowships. In 2018 she completed the Senior Executives in State and Local Government at Harvard University.