In Collaboration with Eagleton’s Center for American Women and Politics, Douglass College, and SCREAM Theater 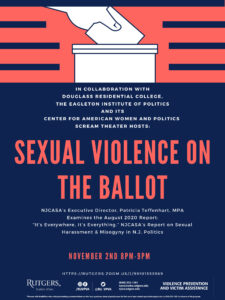 Patricia Teffenhart, the Executive Director of the New Jersey Coalition Against Sexual Assault (NJCASA), discusses “It’s Everywhere, It’s Everything,” NJCASA’s report on sexual violence within the world of New Jersey politics. Some of Teffenhart’s personal achievements include creating and co-chairing the governor’s Campus Sexual Assault Task Force, expanding the New Jersey statuate of limitations on sexual assault, and advocating for the expansion of protective orders for victims of sexual violence. She also is a proud two-time Rutgers alum, first from Douglass College and then from the Rutgers School of Public Affairs and Administrationfor her Master’s in Public Administration.