A Book Talk With Saladin Ambar 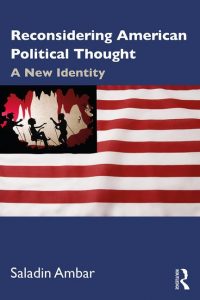 Filling in the missing spaces left by traditional textbooks on American political thought, Reconsidering American Political Thought uses race, gender, and ethnicity as a lens through which to engage ongoing debates on American values and intellectual traditions. Weaving document-based texts analysis with short excerpts from classics in American literature, this book presents a re-examination of the political and intellectual debates of consequence throughout American history.

Purposely beginning the story in 1619, Saladin Ambar reassesses the religious, political, and social histories of the colonial period in American history. Thereafter, Ambar moves through the story of America, with each chapter focusing on a different era in American history up to the present day. Ambar threads together analysis of periods including Thomas Jefferson’s aspiration to create an Empire of Liberty, the ethnic, racial, and gender-based discourse instrumental in creating a Yankee industrial state between 1877 and 1932, and the intellectual, cultural, and social forces that led to the political rise of Ronald Reagan and Barack Obama in recent decades. In closing, Ambar assesses the prospects for a new, more invigorated political thought and discourse to reshape and redirect national energies and identity in the Trump presidency.

Saladin Ambar is an associate professor of political science and senior scholar at the Center on the American Governor at the Eagleton Institute of Politics at Rutgers University–New Brunswick. He is the author of How Governors Built the Modern American Presidency (University of Pennsylvania Press, 2012) and Malcolm X at Oxford Union: Racial Politics in a Global Era (Oxford University Press, 2014), which was nominated for a Hurston/Wright Legacy Award for best non-fiction book by an African American author. Ambar’s book, American Cicero: Mario Cuomo and the Defense of American Liberalism (Oxford University Press, 2017), is the first to examine the entire political career of former New York Governor Mario M. Cuomo.