In cosponsorship with the Rutgers Center for Social Justice Education and LGBT Communities and Rutgers Paul Robeson Cultural Center. 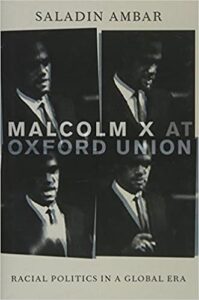 In 1964 Malcolm X was invited to debate at the Oxford Union Society at Oxford University. The topic of debate that evening was the infamous phrase from Barry Goldwater’s 1964 Republican Convention speech:”Extremism in the defense of liberty is no vice; moderation in the pursuit of justice is no virtue.” At a time when Malcolm was traveling widely and advocating on behalf of Blacks in America and other nations, his thirty minute speech at the Oxford Union stands out as one of the great addresses of the civil rights era.

Delivered just months before his assassination, the speech followed a period in which Malcolm had traveled throughout Africa and much of the Muslim world. The journey broadened his political thought to encompass decolonization, the revolutions underway in the developing world, and the relationship between American Blacks and non-white populations across the globe-including England.

Facing off against debaters in one of world’s most elite institutions, he delivered a revolutionary message that tackled a staggering array of issues: the nature of national identity; US foreign policy in the developing world; racial politics at home; the experiences of Black immigrants in England; and the nature of power in the contemporary world. It represents a moment when his thought had advanced to its furthest point, shedding the parochial concerns of previous years for an increasingly global and humanist approach to ushering in social change.

Saladin Ambar joined the Institute in 2017 as associate professor and senior scholar at the Center on the American Governor. Ambar’s research interests include the American presidency and governorship. His latest book, American Cicero: Mario Cuomo and the Defense of American Liberalism (Oxford University Press 2017) is on the political career of former New York Governor Mario Cuomo. Ambar also writes and teaches about race and American politics. He is the author of Malcolm X at Oxford Union: Racial Politics in a Global Era (Oxford University Press 2014), which was nominated for a Hurston/Wright Legacy Award for best non-fiction book by an African American author.

Emahunn Raheem Ali Campbell, PhD, is a third-year student at the Rutgers Law School–Newark. Campbell is a Fellow at the Eagleton Institute of Politics, a Kinoy-Stavis Fellow, and Social Equity Director for the Student Bar Association. In 2019, he was an Ella Baker intern at the Center for Constitutional Rights. In 2020 he was a summer intern at the NAACP Legal Defense and Education Fund, Inc. He was the 2019-2020 president of the Association of Black Law Students and the attorney general for the Northeast Black Law Students Association. Campbell is also a former educator and held positions at Framingham State University, the University of Massachusetts, and Washington and Lee University. He earned his bachelor’s degree in English from the University of Virginia in 2008, his master’s degree in literature from the University of Memphis in 2010, and his Ph.D. in Afro-American Studies from W.E.B. Du Bois Department of Afro-American Studies at the University of Massachusetts-Amherst in 2015.