2020-2021 Clifford P. Case Professor of Public Affairs: Former U.S. Senator Barbara Mikulski, the longest-serving woman in the Senate and in Congress, will visit Eagleton for a conversation exploring the state of our political institutions, her legacy of leadership, and her experiences as “Dean of the Senate Women.”

“Politics is social work with power.”

“Each one of us can make a difference. Together we make change.” 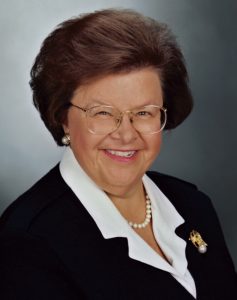 Barbara Mikulski served in the U.S. Senate for 30 years and in the U.S. House of Representatives for the preceding 10 years, becoming the longest-serving woman both in the Senate and in Congress.

She was raised in the Highlandtown neighborhood of Baltimore, attended Catholic schools, and was a social worker in the 1960s. After organizing neighborhoods to fight a major highway project, Mikulski won election to the Baltimore City Council in 1971, where she served for five years.

In 1976, she ran for Congress and represented Maryland’s 3rd district for 10 years. She became the first Democratic woman senator elected in her own right in 1986. As the Dean of the Women, Senator Mikulski mentored other women senators through her bipartisan dinners and power workshops to train newly elected women. Throughout her career, Mikulski has worked to pass legislation to protect the most vulnerable members of society and to advance scientific research and democracy around the world. Senator Mikulski was awarded the Presidential Medal of Freedom by President Obama in 2015.

Senator Mikulski retired from the U.S. Senate on January 3, 2017. Currently a Homewood Professor of Public Policy at John Hopkins University, she participates in speaking engagements on the topics of leadership, innovation, and women’s empowerment across the country. She currently sits on the boards of the National Democratic Institute and Baltimore Community Foundation. 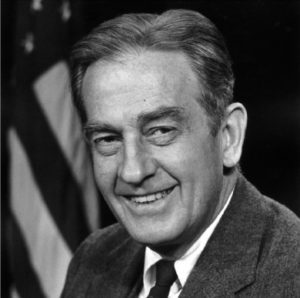 About the Case Professorship of Public Affairs
Over 34 years representing New Jersey in the United States Congress, Senator Clifford P. Case “consistently put principle above politics” and earned “the deserved reputation of having a profound sense of integrity.” In recognition of that distinguished career, the Rutgers Board of Governors voted in 1980 to establish the Clifford P. Case Professorship of Public Affairs, which honors Senator Case by bringing to the Rutgers campus prominent and respected public servants.