A Time to Build:
From Family and Community to Congress and the Campus, How Recommitting to Our Institutions Can Revive the American Dream

A Time to Build:
From Family and Community to Congress and the Campus, How Recommitting to Our Institutions Can Revive the American Dream

Presented by the Louis J. Gambaccini Civic Engagement Series and the AEI Executive Council at Rutgers, a conversation with Dr. Yuval Levin 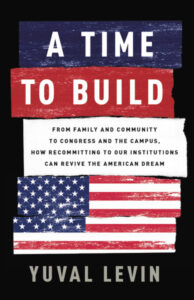 Americans are living through a social crisis. Our politics is polarized and bitterly divided. Culture wars rage on campus, in the media, social media, and other arenas of our common life. And for too many Americans, alienation can descend into despair, weakening families and communities and even driving an explosion of opioid abuse.

Left and right alike have responded with populist anger at our institutions, and use only metaphors of destruction to describe the path forward: cleaning house, draining swamps. But, as Yuval Levin argues, this is a misguided prescription, rooted in a defective diagnosis. The social crisis we confront is defined not by an oppressive presence but by a debilitating absence of the forces that unite us and militate against alienation.

As Levin argues, now is not a time to tear down, but rather to build and rebuild by committing ourselves to the institutions around us. From the military to churches, from families to schools, these institutions provide the forms and structures we need to be free. By taking concrete steps to help them be more trustworthy, we can renew the ties that bind Americans to one another.

Yuval Levin is the director of Social, Cultural, and Constitutional Studies at the American Enterprise Institute (AEI). He also holds the Beth and Ravenel Curry Chair in Public Policy. The founding and current editor of National Affairs, he is also a senior editor of The New Atlantis and a contributing editor to National Review.

Dr. Levin and scholars in the Social, Cultural, and Constitutional Studies research division study the foundations of self-government and the future of law, regulation, and constitutionalism. They also explore the state of American social, political, and civic life, while focusing on the preconditions necessary for family, community, and country to flourish.

Dr. Levin served as a member of the White House domestic policy staff under President George W. Bush. He was also executive director of the President’s Council on Bioethics and a congressional staffer at the member, committee, and leadership levels.